Spartan Race Mallorca, you were brutal in so many ways. What a way to start the 2018 season!

It started with the first brutal moment at 9 AM. The Elite wave went off and I was sidelined. I felt that one. That was my wave. That was supposed to be my first competitive race of the new season. Hell, it was supposed to be my only Elite wave in 2018. But there they went. Without me. Because I wasn’t allowed to put bodyweight on my wrist yet. Which meant no Rig, rope climb or burpees. So, starting Elite would only have resulted in a DQ. The only thing to do was wait until the first open wave at 9:45. Here the first obstacle came. Getting into the starting area. Would my wrist be okay? Would I still be able to get over a wall on my own? While waiting I saw a few of the Age Group women struggling with the wall, but I was over the wall before I even realized what I was doing. Just a walk in the park. After a ‘warm-up’ (I forgot they have those in the open waves) the start shot sounded and everybody went for it. I forgot how it feels to start with an uphill run, so I had to adjust my speed. I was there to enjoy the race, not to win the open wave. 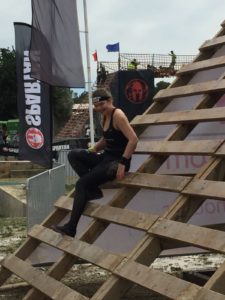 After a few meters going uphill, the other walls appeared. Again, a few people who were struggling with getting over these walls. How where they supposed to get over the big ones later on? I am actually doubting which obstacle came when on the course, so I’ll just let you know how I remember. After the ouou (over-under, as Spartan calls them in their survey)I hopped over the hurdles (why were these so hard for me about a year ago?) and back to the trailing. I gave a woman in front of me a little push on the high wall (remember my previous words?) before heading to the Olympus. I actually got further this time!3 I watched so many clips before the race and they actually helped. But I could feel this obstacle and my wrist wasn’t the best match so halfway through the Olympus I let myself fall and reported myself at the burpee area. Where they let me do another kind of penalty because I couldn’t do the burpees. So 30 Jumping Jacks it was.

At this point in the race, I already passed a few Elite/Age Group runners. Seeing that the Olympus was followed by a nice climb (approximate 99D) which ended in the chain carry. Of course, you had to go up and down a hill again. I mean, it’s a carry during a Spartan Race in a country with mountains. Did you expect anything else? I actually really love taking that chain up and down a hill or mountain! Anyways. After letting go of the chain another nice steep hill came on the course (117D). Why do I bother telling? I mean, almost every trail part was either going up and/or down a mountain!

Among a lot of blue bands (Elite or Age Group runners) I came at the slackline. I managed to finish my right foot, but because my left one was left behind it was penalty (squat) time again. After a nice downhill trail (love this!) a few obstacles came in sight. We started with the low monkey bars, then to the barbed wire crawl (where my hair got caught) towards the bender. Another obstacle I used to be afraid of, but now I go over without thinking about it. So guess what came next? No, not another mountain (yet). A nice little carry. A little ammo case for a little walk in some trenches. Going up-and-down the mountain, Stairway to Sparta and down the hill towards the pancake carry. So, I’m actually good at 99% of the balance beams (the slackline is the exception), but doing the balance beam with a 30lbs pancake with lots of wet mud from the guys before me had me doing the penalty again (after nailing the balance beam without a pancake. What can I say, I love balance beams). Only this time I had a hard time explaining that I wasn’t allowed to put any body weight on my wrist yet, so I couldn’t do burpees or anything like it. I think it took me about 5 minutes before I had the official convinced in letting me do jumping squats. Like, seriously, I’m in the open wave! I’m not trying to qualify or get on a podium. After my squats and a drink, I went on to the atlas lift, where I could swap my five burpees for ten jumping jacks. A nice uphill barbed wire, and onto some terrain that had ‘Spartan Danger’ signs on it. I think the danger signs were put up because of all the loose stones and the fact that some parts were just vertical! I say VERTICAL! So, mind your step. Over the high balance beam (love) onto my worst nightmare. 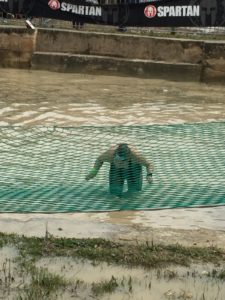 At this point, we were 10K in and my watch told me I had been on the course for two hours. So, a 12 min/km pace. OMG. I knew it was a rough terrain with all the hills and I was taking it easy because of the last couple of weeks, but 12 min/km. Come one. Little did I know that the next 2K would take me 30min. I named this part ‘the hill’. 2K of going up the mountain, down the mountain, take a log for a walk, go back up that mountain and try not to break your ankles on the loose stones when going down again. Okay, maybe I can take 5 min of my time here because I spend them talking with Andrea, but still. Going up and down a 128D mountain. Going up was bad, but going down the mountain on the return was worse. So many loose stones and rocks. I just took my time, I didn’t want to fall and/or get injured.

But we survived. After that a higher than usual inverted wall showed up, with the sledge pull behind it, on to the z-walls, dragging a concrete block behind me, jumping over some low walls and on to the finish. Well, the obstacles around the festival area.

An easy Hercules hoist, but with tough volunteers. If you didn’t let it down slow enough or if you dropped it too soon, it was burpee time! On to the spear throw (I missed), to the multi-rig (squats), the robe climb (squats) and do a nice bunny hop that entertained the crowd. There it was. The big wall without a ‘ladies’ step up. No, just get over on your own. Challenge accepted, challenge succeeded. The photographer behind the wall was a bit unexpected, so that are probably some funny photos. On to the cargo net, little walk through some waist-high water, the slip wall and I finished. My first Spartan of 2018.

And we're on week 4 of @garmin coach Road to Half

It's a good thing I have a half marathon buddy in

Just a small throwback, because seeing this video

Always nice when you get a little push from the wi

Had a fun day with @melissanauta today ❤️ Smal

12 days of Christmas workout done🎄 Had fun, but

Buon Natale 🎄 I hope you'll have a great day, r

The last year has been, well, I didn't do shit. In