A little bit late, but what the heck! Let’s talk about Spartan Race Windsor 2017. I’ll give you a little bit of a background. Back in 2016, Windsor was my first Spartan Beast (and third Spartan overall). It also was my longest race ever, in distance and time. The course itself was approximately 26K and it took me 5:10:27 hours. Okay, I did do a 12K Ram Run the day before, but still! I will never forget that race. So, a year later I had to go for revenge! With no Ram Run the day before and a lot more experience in my pocket I flew to England.

When I registered I didn’t run Elite yet, so this race was an Open Wave race for me. I didn’t even think about the fact that you could switch to Age Group or Elite. So, after standing in a ridiculously long line I finally got my headband and went to see all the competitive racers start. At this point, I really was bummed that I didn’t switch, especially after Dennis told me he switched to Age Group without having to pay a single penny! Nothing to do about it now, just go with the flow and have the time of your life. 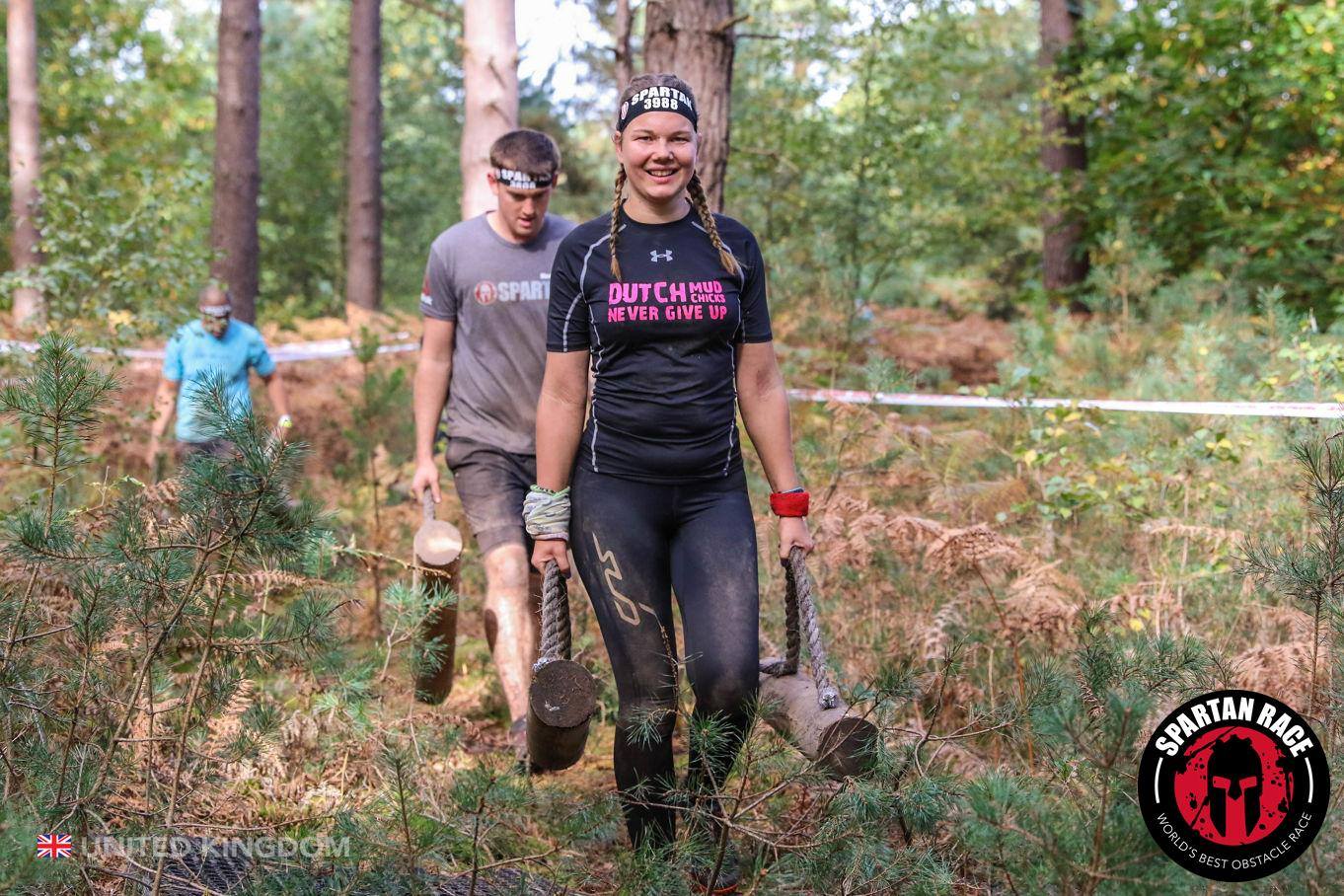 So I did. I started in the (I believe) second open wave and tried to stay in the front. This was actually going pretty okay until I got stuck in a bit of mud. Seeing that it was a single track after this I lost a few spots, but still was in an okay position. I mean, I wasn’t racing or anything. When we came at the first waist-high walls, I saw a female having trouble with this. I tried to give her some pointers, but she didn’t take them. Well, okay, let’s go to the next stop! Literally stop, because there was a (dry) sewer pipe we had to crawl through with space for one person at a time. Well, sorry RD, this wasn’t a smart choice! I think I stood in line for about 20 minutes? A few guys came running by, telling people they were here to race. Well, me and my newly found waiting buddy weren’t going to let them pass. We were all waiting and if they wanted to race, they should have started in the Elite wave. So people started boo-ing them when they skipped this part of the course. I was there to have fun, so after this really small crawl (seriously, it was about 3meters long) I went on to the tire carry. Here some friends who started after me came by. They told me they skipped the crawl. Ow boys, I kept my thoughts to myself. After that, we had to do a short traverse, with a lot of people who were thinking ‘what am I supposed to do?’. So, nailed it! But please people, learn the proper way! Don’t drag your ankles. I saw so many wounds ready to get infected. 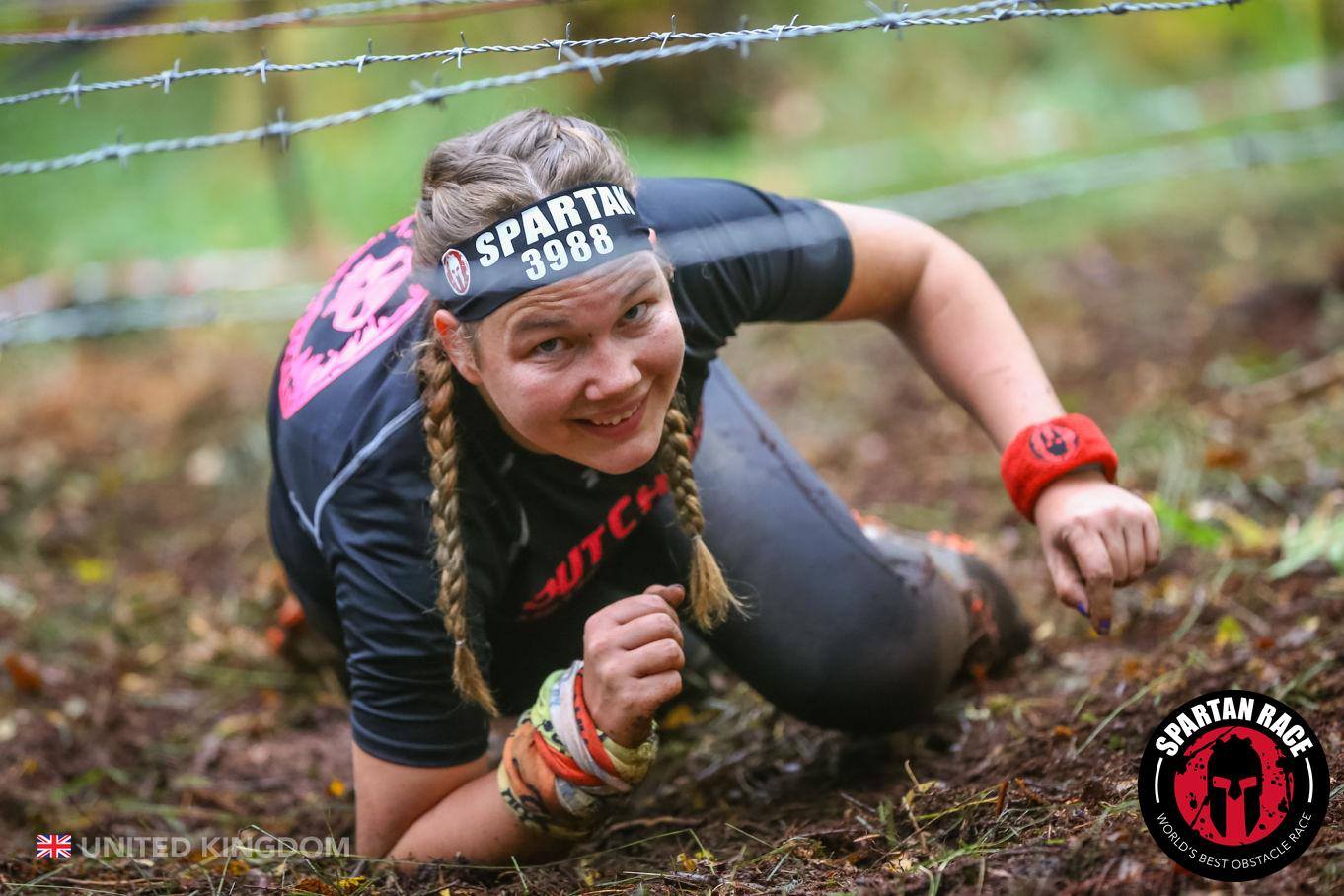 So I quickly averted my eyes and focused on the course. I must say. Last years course was so much prettier than this one. I actually didn’t like the landscape a bit at this one. All the swamps made it hard, which was fun, but the course just missed some ambiance. But I couldn’t think about this too long, seeing that the Bender came up. How afraid I was the first time, how much I love it by now. I think that’s a result of the whole ‘conquering your fears’? A little bit of crawling under barbed wire while going downhill and then my first burpees came up. Seriously. There are a few obstacles I just ain’t getting a hang on and one of them you can only fins in England. I have no clue what it’s called so I couldn’t find a picture, so here’s my description: a straight vertical wall, with some ropes hanging from them, and you have to get from the left to the right without touching the top or ground. I mean. How in the world am I supposed to get to the other side with only those ropes? Yes, I know. Grip strength. Well, 30 burpees here we go! Luckily we had to do a bucket carry after this one and I’m actually starting to enjoy this one. I don’t know how, but being able to do this really is great. Except for the part that I started to get stomach cramps right about here. I already took some painkillers in the morning, but apparently, they stopped working. So, just take a breath and walk it off. So, seeing that the farmers walk was one of the next obstacles actually worked out. I could just take my logs for a little walk while trying to control the pain. So when I got to the 6” walls they were easy peasy. I even managed to actually ring the bell again with the rope climb. Overcoming another fear I guess.

After the Z walls, I got a high five from the volunteer before I started to help out my fellow runners at the plate drag. Seriously. The part where you had to drag your plate was full of pits and roots, so your plate would get stuck and the volunteer had to come and help you. I decided to be a good Samaritan and help my neighbour who got stuck before I left the obstacle. No race, remember! And then the rig came. Well, rig? It was filled with only rings, and I had so much fun swinging there. I wished it was longer because it was so nice to just swing from ring to ring. Well, of I went to the next part. Remember I was talking about those people who dragged their ankles on the rope which now had wounds ready to get infected? Here comes the infected part, because we had to walk a few hundred meters in thick knee-high mud. Here the volunteer told us we had just one K to go. I laughed at him. My watch said we were at 17K, no way we were getting anywhere near the finish. Until we came from the mud and indeed were at the start/finish area. Dennis was standing there and saw my confused look. Apparently, the race was just 18K this year. A Super, instead of a Beast. Well, luckily for me I came into burpee zone, so the run wasn’t over yet. 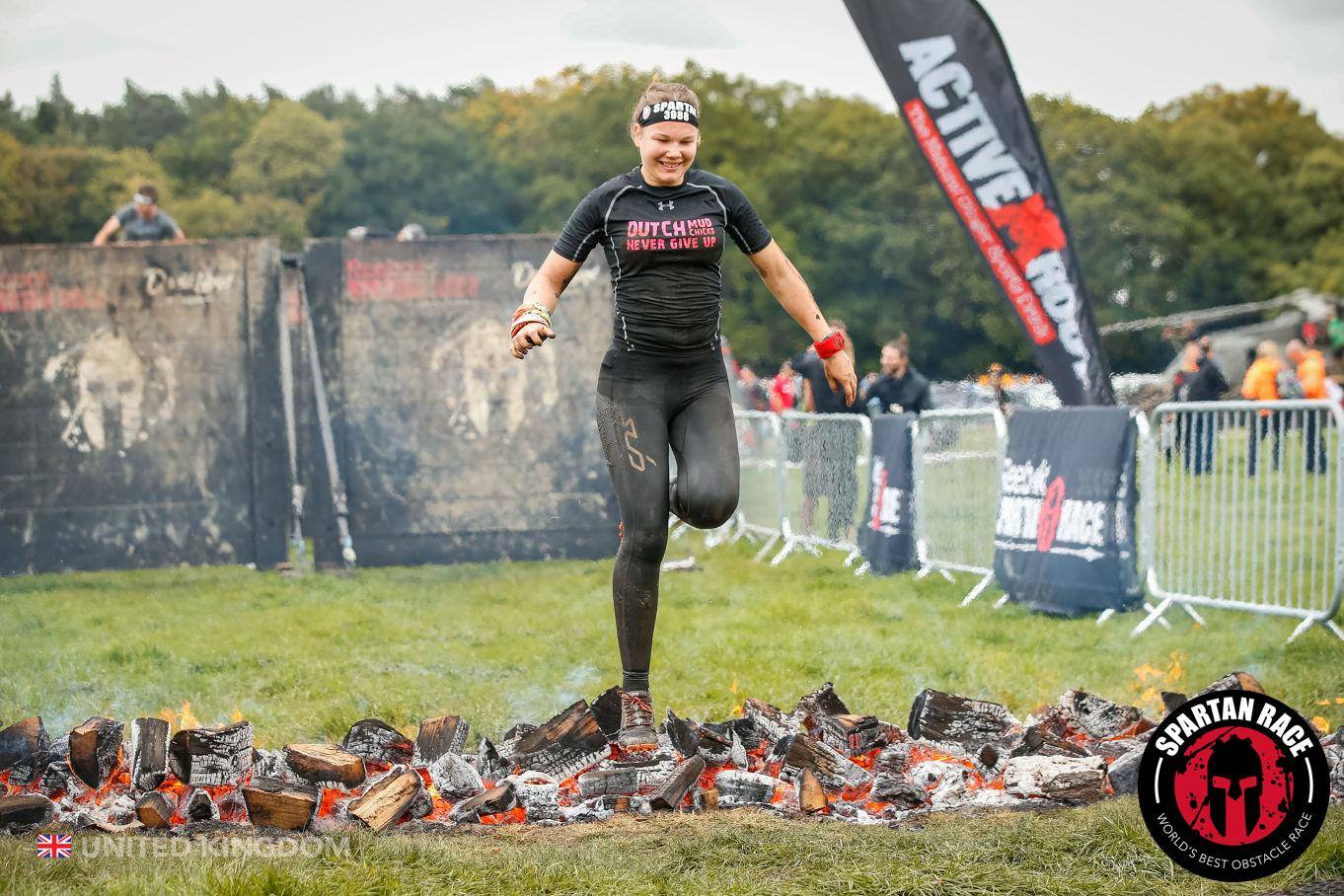 The twister. I touched this one ones before. In Edinbrough. Where it was slippery as hell because of the rain and I had to do burpees. This time I actually finished the first bar, but trying to traverse to the next part I had some troubles with the distance between the bars. Nobody told me you could use the bar that was in between, so I fell. 30 burpees. Well, I did come somewhat further than before. Guess what came next? Spear throw. I should have stepped a meter or somewhat to the right because my spear almost went into the next one. That’s how far off I was. 30 burpees. Luckily something I could do came up. Balance bars. Ran across them to get stuck at the Olympus. Seriously. Again. How am I suppose to do this? 30 burpees. After this, just two high walls were all that was left between me and the fire jump. So up I went on the first wall, and I got a cramp in my leg while going down. On the second one I got some help getting over (ong, that cramp!), because it’s open wave! And then there was the fire jump and my medal.

Would I run this one again?

At the moment I haven’t booked this one for 2018. In 2016 it was an amazing event, but 2017 kind of let me down. Yes, my result was better, but I didn’t enjoy the event as much. It was a short course, but the year before had been a really long course. However, the English races are always done in an excellent way. And in 2018 it’s a Trifecta weekend.